Snippet! "The Art of Living "

Billy stood up. “What do you want, Shi? This is ridiculous.”
“I want you dead!” he snapped at Billy, whirling around. “You and that other bitch! But these people have other ideas for her, so I’m willing to compromise and make sure that you and James Dobbes are done in.”
Lilly stood up. “You are not doing anything to anyone.”
Shi stuck his finger in her face. “Sit down and shut up and you get to keep that pretty little head of yours.”
The other men were heading straight for Nathan, and I ducked down, covering my face. If they saw me, there was no way out of this. The shock on Nathan’s face was brief and then disappeared. I was afraid he thought I was being a coward, but I wasn’t. I was doing the only thing I could think of to get them all out of this. They marched up to him and grabbed him under his arms. They ignored me, and he went with them, fighting only a little.
Several of the lackeys started forcing everyone to one side, and we all started crawling toward the back of the seating area, trying to get out. I crawled along with the rest of the crowd, trying to get a read on what was going on around me. I saw all the journalists heading down one aisle, and I chose another to crawl through where there was no one. I glanced behind me, and I was the last one crawling out. I peered around on either side, and I was quite well-hidden in the chairs.
It was now or never.
Ninja note number—whatever. Always take the chance when it comes up.
I stopped crawling and curled in on myself. I brought my hands around to my face where I could see them. I took a deep breath, then I went through the little hand ritual Rebekah had set up for me: snap with each hand using the middle finger, then tap on the back of my left hand with my pointer and middle finger three times.
The odd tingle flared quickly all over, and then just as quickly disappeared. My hands were now covered in white gloves that led to the sleeves of the traditional ji the White Ninja used. That I used as the White Ninja. And holy moly, wasn’t this convenient? The clothes had simply melted away and were replaced, that easily.
Being a little witchy was really proving to be handy.
I stayed where I was and just waited. I had two ideas, which all depended on the lackeys and their reaction or lack thereof. The direction was picked pretty quickly when one of them came over and poked me in the back with a rifle.
“You gonna move, bitch?”
I shook my head and stayed where I was.
He poked me again. “Come on, move it. I don’t care if you shit yourself, you need to get going.”
I shook my head again, and I heard him turn around, probably to talk to someone else.
I tossed myself over onto my back and shot my legs out, catching the back of his knees and knocking him forward onto his face. The gun went off as he hit, which pissed me off because one, where was the safety on that thing? And two, that was more attention than I wanted at that point. Oh, well, moving on.
I tossed my legs up over my head and flipped into a crouch. The guy I had knocked down was trying to crane his neck around to see what had just happened to him. I put a finger to my lips. “Ssh.” I could hear the smirk in my voice. “Don’t tell.” I jabbed at his neck and knocked him out with a single push on a nerve. I was more than happy with that move; Master hadn’t been sure we had really mastered the spot. Clearly, I had, and I was now sure Billy had too.
I peered around through the chairs, marking the locations of the lackeys. Two had spotted their comrade go down and were heading over from the other side. I grabbed the gun from where the guy had dropped it and pulled out the cartridge, skidding it toward the other people at the exit where they corralled everyone, then dropped the empty gun on the ground. I looked back, and they were just about to see me hiding in the row of chairs. I shrugged and decided I could catch them unawares if I moved.
Welcome back, White Ninja.
I tossed myself forward, launching over the unconscious lackey, landing on my hands, and tucked and rolled back to my feet. The next lackey was standing in shock, staring at me. I cocked my head and shot my fist out and caught him in the stomach. He made an almost comic-book “oof” as I made contact. The other guy came up from the side and brought his gun around. I managed to launch into a round house and knocked the gun out of his hand, sending it flying.


I walked up to the stunned lackey. “Boo.” My fist shot out and hooked him in the jaw. 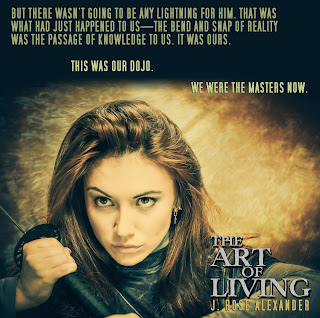 What a bang-up year this had been.

I'd started training as a ninja, discovered I was a witch, found out I was pregnant, had the father walk off and basically tell me to screw off. I discovered a best friend, a new cousin, got a new job, managed another New York Times best selling novel. I put on a mask and became a superhero, got to fly with another one, and was currently writing hilarious news pieces about myself and my cousin as superheroes while hiding in plain sight.

After all that, I thought that life would calm down.

I was naive. And I was not prepared for what was coming. Sometimes being a superhero didn't always mean you had to wear a mask.