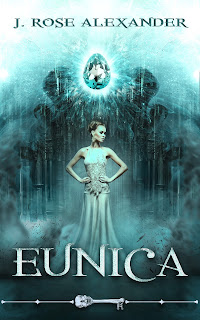 A life full of death is no life at all.
But Devon prefers to stay away from the living and deal with the dead. No social life, no parents, no family and only one friend, she hides away in the possessions of the deceased. One of the dead leaves behind a key-- a small piece of metal that transports Devon, quite literally, to her destiny.
Grandin is a sicutus -- a human with very little powers. Set into his corona, or circle, of Air elements, he has given up on his world as well and has chosen to guard the Eunia Crystal with twenty others. They are solitary people, revered but left alone. And it on his watch that the Eunia comes alive--and bring his destiny to him.
As the government of Cardinal Terrun sits on the precipice of disaster, only Grandin and Devon can make the decisions that save his world-- or throw it into a war in which they are both the generals and the victory prize.
Posted by Jenn at 10:54 PM No comments: