WIP Blurb -from "Art of Living"

"Art Of Living" from
The Superhero Chronicles

I've got no idea when this would be out, but I'm enjoying writing it. For those of you who don't know, WIP = work in progress.

“I spent five years in the dark,” he answered. “That was more than enough to get the idea through my thick skull. When this was found, about seven years ago, several other Ábeþecian-án down here, both durzon and otherwise, decided it would be best if no one ever saw this.”

“Then why are you showing us?” Alex asked.

“Because the first and only person to ever touch it died screaming your surname.”

“Fab,” Alex grumbled. “So these people are after who? Me? Cindy? The Easter Bunny?”

“Peter wouldn’t like you dragging him into this,” Tomas said.

Alex stopped. “You’re kidding.” I was holding back my snicker.

“I just found out about witches and daemons,” Alex said, as we all resumed walking. “At this point, the Easter Bunny and Santa don’t seem that far fetched.”

So, well-deserved after 200 likes on my Facebook author page, here's a little teaser for you from Chapter 1 of Shadow in Glass.

Carrie scratched her head. A nurse? How old was she? Nurses were something babies had. Carrie climbed out of the bed and walked into the bathroom. She turned and looked in the mirror and squinted at the reflection there. It was her face, but at the same time, it was not her. Her skin was far more perfect than she remembered it ever being. She had sculpted eyebrows that even she was jealous of. She pushed her hair out of the way to examine the bandage, and was immediately distracted by the fact that the scar she had gotten jumping off the bed when she was 6 was gone.

She felt her eyes filling with tears. She pressed on her skin looking for the scar. She was really frightened. If this was a dream, why wasn’t she waking up? Where were her scars? She couldn’t stop the tears from rolling down her cheeks. She looked into the mirror to see her face again, to try and find the scar at the hair line, and gasped.

Her brother's face was staring back with tears rolling down his cheeks. He was but a shadow in the glass, but she could see him with amazing clarity.

“Eddie?” she asked the mirror. She looked at him; her stupid older brother was wearing a black suit and black tie and looked groomed like he never was. “Eddie!” she called, placing a hand on either side of the mirror. He still didn’t answer her; he smeared away the tears on his cheeks. “Edward! What the hell is going on! Eddie!” she screamed at the shadow.

She saw her mother walk into the room behind Eddie. Carrie gasped; mom was dressed in back, and she had clearly been crying as well. Mom walked up to Eddie and said something to him, adjusting his tie. He swatted her away gently, and she sighed. Mom left the room slowly, and Eddie turned back to the mirror. She screamed at him one more time, “EDWARD!” He touched the mirror, and sighed. He turned and started to walk away.

She slammed her hands on the mirror. “EDDIE! Come back! Eddie!” Carrie screamed. “EDWARD! Come back! Don’t leave me!”

Coming, August 15 to Kindle, Nook and Smashwords.
Posted by Jenn at 11:32 PM No comments:

Whoopsie. That wasn't supposed to happen...

Well, I'm kind of still trying to get used to all these different promotional aisle that I can now navigate. Except everyone else is in power boats and I'm in a gondola, punting down the Thames here.

Hence, I slipped up.

I used the cover of my new book on the cover of my Facebook Author Page because it's cool and creepy. What I didn't realize was that it was going upload the whole image and put it in my pictures. Dang it!! So I guess without further ado, and without as much fanfare and pomp as I was going to use, Here is the cover and synopsis to my first solo project, "Shadow in Glass"

Waking up a Princess is usually a little girl's dream; the reality, Carrie finds out, isn't exactly a fairy tale.

Carrie Whitmore, aspiring journalist, wakes up after a building collapse to find herself in world where she is a spoiled, bratty princess who is engaged to a self-indulgent egomaniac. She has no college education and no friends at all. Carrie finds out that "she" wants nothing to do with the crown after the death of her brother and is happy being bitter, cruel and reclusive.

But that's the old Princess Barbara, lost in the tragic accident that slipped Carrie into the Princess's life. Carrie must change the way the people of the Nation perceive her.

Her journey to learn who she is in this new world and to deal with the twists and turns of her unwillingly adopted life will change her perception of everything and everyone around her. And maybe, just maybe, she'll get the fairy tale princess ending every little girl dreams of. 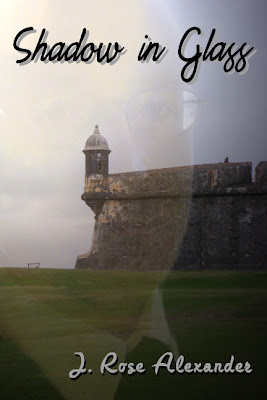