Have a seat. *pats chair* We need to talk a bit. There's something important you need to hear.

Now, I'm not a seasoned writer like Stephen King or Anne Rice or Diana Gabaldon or Maeve Binchy. Well, not seasoned in the number of books I've published, but my unpublished stuff would give Mr. King a run for his money. And that's where I'm coming from: Those piles of papers, stacks of floppies, filled flash drives, burgeoning external drives-- Full of the things I've written since I was a kid.

Some of that stuff should be not just shredded, but incinerated as well. It's bad. And inexperienced. Very inexperienced.  And mind you, when I say "stories", I'm talking about 200, 300 handwritten pages (which usually condensed to about half of the total pages). One hundred typewritten pages properly formatted is about 45,000 words.

ALL of which needs to be burned and never read again.

It was probably around 18, 19 that I started to notice a polish to the stories. Where I thought I might be able to start really writing stories that could be publishable. I also kicked up the story numbers: instead of just 45,000 words, the stories were now 110,000 to 150,000 words. Interwoven plots, dynamic and static characters, diversity, I started adding things like MacGuffins and twists and using interesting vocabulary. 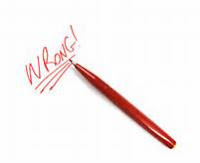 And, ladies and gents, I was a lit major with journalism minor. I had my stories and poems routinely ripped apart by my professors. They were the most confounding people on the planet! "This is excellent! You get a 77 for it!" I realize now what they were doing- they saw I did have the ability to write and were forcing me to hone that.

Let's take stock of the time we have so far. I started writing when I was seven. I was now a graduated college student writing for a newspaper, so 23 or so. That's 16 years of unpublished work, half of which needed to be burned and half of which was salvageable with heavy rewriting. And I'm still not even sending out queries letters yet!

I wrote probably another 10 or so 100,000 word stories in the years between college and my first query letter, at age 29. We're at 22 YEARS of writing before I finally said, "Ok. We're there. It still needs help, but at least it's a story."

And I didn't get a single hit. Not one. I'm probably around 90, 100 query letters. Most of which were, 'thanks but we didn't even read this'. I had one honest critique from a super small publishing house that had one scifi/fantasy story already in-house and they were too small to take another. At least that was encouraging.

The digital publishing revolution happened. Now, anyone who can tell a story can get "published". If you can cobble together a half cogent story, PubIt!, Kindle Publishing and CreateSpace are happy to put it out for you. Once upon a time, this was called vanity press. Now it's just self-publishing. And anyone can do it.

That is where we are, my dear aspiring writer. And let me tell you what brings me to this table with you.

I like reading, as well as writing. Very much. I've devoured books, 900 pages in a one day marathon. Love it. So the idea that there is a world of new, untapped talent out there makes me very excited. All those stories can now be told. Huzzah! Hooray!

For the second time in as many weeks, I excitedly downloaded a new novel by someone who was self-published. I consider my purchases very carefully if they aren't free. So these were carefully considered purchases. Novel #1, purchased last week, has been deleted from my Nook. Novel #2, started last night, is in danger of the same.

Novel #1, which I won't give the name of for the sake of the author, was self-indulgent and meandering crap. Twenty pages into the story and I STILL had no idea who the main character was or what the hell was going on. The editing was fine; I will give her that. But the story had no hook. It didn't even have a hint of what was going on, and you damn well better throw the reader a bone in the first 10 pages or it's curtains.

Novel #2, which I am exactly 3 paragraphs into, hit me with three offensives uses of language. I'm not talking about swear words, because fuck that. I'm talking about misuses of the English language. Two misused words and an instance of abusive punctuation. I am willing, nay, outright telling you that my spelling is rough at best and my grammar needs a little polishing. (My punctuation, however, usually kicks ass.)

(*Addendum-- this author is the Crowned Princess of Run-on Sentences. I can't even mentally breathe while I'm reading this!)

But there was one thing that was beaten into my head by both the lit/creative writing profs and the journalism profs:

Never edit your own work.

I do this dance with all of my students. Have someone else read your paper. I know this isn't a writing class, but this work represents you. Also, we speak a language- not Bingo. It's 'before' not ' b4'. I have broken my rule, yes, but to the detriment of the work that I was presenting.

Now. Where am I going with all this? It's simple.

Just because you can write a story does NOT mean you have crafted a novel. No matter how many people tell you can write does not mean that you should go out and just slap some shit online. Yes, yes, you may very well have the talent-- but that talent has to be formed, torn down, reassembled and polished. You have to understand the intricacies of the use of language.

If you're going to stand there and start yelling, "Stylized!" at me, I'm going to take off my shoe and throw it your head. You can only stylize your writing once you've gotten the language down correctly. Read an author's early work. You'll find that they are perfect, and may actually lack the author's voice that you've grown to love. Read a later one and the writer's style is all over it like bird sh*t on your car in the spring. But they developed that style, they didn't start out that way. You want a good example of effective stylization? Go read J. R. Ward's Black Dagger Brotherhood. That sh*t is tight. And yet in between her representation of style, you'll see a mastery of language.

Bam. Spiceweasel, kickin' it up a notch.

Here's a list of things aspiring writing should do:

1. Take some literature courses- Romance novels, English novels, Contemporary Lit, Modern Lit. Learn about it, don't just read it.
2. Join a book club/ message board- find out, what do people like and not like about books?
3. Buy Strunk and White. Don't ask me stupid questions. Just go to the bookstore and get your ass a printed copy of Strunk and White. Read it. Mark it up. Refer to it often.
4. Read. Read read read read read. And read some more.
5. Write your book. Then put it in the damn drawer for no less than 3 months. Don't go back to it, don't revise, don't f-cking touch it. When 3 months is up, take it out and reread it.
6. Now. Sit down and rewrite it. Tear the ever-living-shit out of it, or do simple rewrites. But rework your work.
7. Go find an editor and for the love of all that is holy and in the name of Shakespeare, listen to them.
8. Get an impartial beta reader. Someone who has never read the story and doesn't know it at all.
9. Go back to your editor with the beta reader's remarks and work them in.
10. Spend more time on the INSIDE of your books than the outside. Yes, covers are important, but a pretty cover gets deleted just as fast as shitty one if your story sucks.

So, my dear aspiring writing, from a barely published author who has been writing for 31 years-- Please. Sit down before you fall down. We can at least pretend to be civilized (wo)men.
Posted by Jenn at 11:52 AM No comments: