Snippet: "The Art of Dying"

The Art of Dying

The Art of Dying 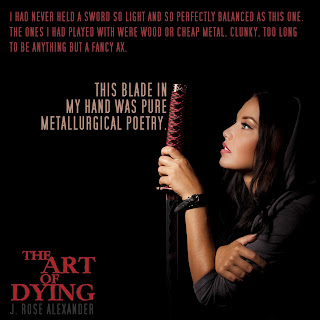 No one starts out to be a superhero.
But there's my cousin—mask and costume—and I'm convinced she's certifiably insane.
Beth hit it big in Hollywood and created a baseball team so I could play. She started taking martial art lessons and she decided she was going to start ninja'ing around New York City. And that had nothing to do with us losing our mothers and her brother when we were young
See? Insane. I mean, who the hell wants to be a moving target?
Well, I'm not really one to judge. After all, I took those lessons too. I'm out there with her: hiding in shadows, avenging the less- fortunate, saving the damsels in distress--and bachelors in a bind--getting shot at, threatened with death, chased with swords and tossed into situations we had no business being in.
Let's just say that we’re in trouble if phone booths ever go out of style.
We kinda liked it. I guess we're both nuts But no one starts out to be a superhero. No one wants to be the last of a breed of ninjas.
And, no one really wants to learn the art of dying.
Posted by Jenn at 12:12 AM